On June 10, 2016 Pope Francis, in a formal decree, elevated the July 22 memorial day of Mary Magdalene to an official feast day. The Pope’s action, as always, drew mixed reviews. While the vast majority greeted the news with a positive nod, there were some who wondered why Francis decided to make such a move at this time, and why Mary Magdalene? After all, wasn’t the former prostitute more of a sinner than a saint?
I, for one, am thrilled that Pope Francis has finally given Mary Magdalene her due! I have spent the better part of my academic career researching, teaching, writing, and publicly speaking about the lives of women during biblical antiquity, and in recent years have narrowed my focus to the fascinating figure of Mary of Magdala. I was delighted to have been selected as the keynote speaker at the International Women’s Symposium in March 2016, held in Mary’s hometown of Magdala. It was a wonderful experience to walk the streets where Mary once walked and to meet others at the symposium who shared my interest in her life.

Next to the mother of Jesus, Mary Magdalene is perhaps the most well-known woman in the New Testament. Unfortunately, much of what people think they know about Mary is based on misinformation. Indeed, of all the women in the Bible, with the possible exception of Eve, no woman is more misunderstood and misrepresented.
Without a doubt, the most entrenched misunderstanding is the belief that Mary Magdalene was a rehabilitated prostitute. This image of Mary as a reformed prostitute has been sketched and drawn, whittled and chiseled by countless artists, preachers, and teachers throughout the ages. For example, many artistic renderings of the saint feature her scantily dressed with her breasts exposed. She is often depicted with long, flowing red hair. Red hair is often connected with evil in the ancient world thus connecting Mary with something evil. 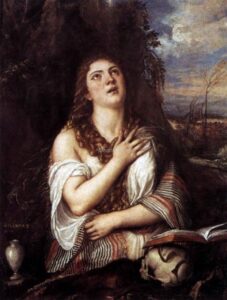 Beyond the world of art, stories, poems, songs, and sermons have reverberated throughout the centuries reinforcing this faulty image of Mary. The end result is that for the better part of history, Mary Magdalene is remembered not as Jesus’ intimate, caring friend, faithful disciple, and powerful woman in her own right, but as a prostitute!

Of course, one could argue that this image was often viewed as a positive one of redemption: the fallen woman rehabilitated by Jesus. People are enormously attracted to such stories; we find them inspiring and hopeful. But as inspiring as this sort of story may be, in the case of Mary Magdalene, it is a totally false one. Mary Magdalene appears in all four of the canonical Gospels, but never once is she referred to as a prostitute.

So who is responsible for this defamation of character? Scholars usually point an accusing finger at the sixth-century pope Gregory the Great who delivered a public sermon in which he conflated the stories of three completely unrelated biblical females, assuming them to be the same woman: Mary Magdalene; Mary, the sister of Martha and Lazarus, and an unnamed woman from Luke’s Gospel who anointed Jesus’ feet with her tears and dried them with her long hair (Luke 7:37-50). Luke refers to the unnamed woman as a sinner—and later commentators assume that a sinful woman must, of course, be a prostitute—despite the fact that the nature of her sin was never revealed.
The sad result of Pope Gregory’s blunder is that Mary Magdalene was erroneously branded a repentant prostitute ever since. While Gregory may have initiated the confusion, Mary’s image as one of the Bible’s most notorious bad girls stuck. In fact, it was not until 1969, that the Catholic Church officially acknowledged Gregory’s mistake, but even since that acknowledgment, Mary’s image as sinner extraordinaire lingers still. Whenever I speak publicly about Mary Magdalene, including in my university classroom, I often begin by asking my audience this simple question: Who was Mary Magdalene? Invariably, a confident hand is raised and the individual identifies Mary as the prostitute healed by Jesus.

The time has come for us to discard this blemished, inauthentic portrait of Mary Magdalene and explore the truth about her. In order to gain a fuller understanding we must explore what the New Testament, other written sources, and archaeology tells us about her. The Gospels provide no clear personal details of her age, status, or family, but here’s what we do know. Her name, Mary Magdalene, provides us with our first real clue, suggesting that she came from the town of Magdala. Usually, when a town or village is mentioned in connection with a woman’s name in the Bible, it indicates that she is a woman of wealth or higher social status. It is also important to note that whenever Mary’s name is mentioned along with those of other women, her name almost always appears first, a biblical convention indicating her prominence.

The town’s full name is Magdala Tarichaea (roughly translated as “tower where fish are salted”), and not surprisingly Magdala was known for its salted-fish industry. The town’s name and its primary commerce provide concrete clues that bring us closer to Mary’s true identity. We know that the fishing industry in ancient Israel was a highly profitable one and that Magdala’s salted fish was exported in and around the Mediterranean. This means that Magdala was an affluent town, and Mary, assigned the town’s very name in biblical references to her, likely came from a family of means. In archaeological excavations currently underway at Magdala, a large marketplace has been unearthed, including stalls for selling fresh fish with their telltale plastered salt pools for holding the catch of the day. Additionally, a huge warehouse complex designed to store salted fish and ready them for export was discovered next to a sturdy stone wharf.

Mary’s “rich girl” status seems to be supported elsewhere in the New Testament. For example, in Luke 8:1–3, we learn that Mary was one of several women who traveled with Jesus and the Twelve and who helped to finance his ministry.

We do not know how Jesus and Mary Magdalene met, but there was something about her encounter with the rabbi from the Galilee that changed her life forever. Perhaps it was the fact that Jesus healed her from a debilitating illness. The Gospels of Mark and Luke report that Jesus healed Mary by casting out of her “seven demons.” People during biblical antiquity did not understand the etiology of neurological or mental disorders, and believed such maladies were the result of demonic possession. Most commentators agree that the seven demons mentioned in connection to Mary is actually “Bible Speak” for a seizure disorder, like epilepsy.

In the ancient world, people were fearful of such disorders and viewed such afflictions as a form of Divine punishment. They also believed that demons could jump from one person into another, which created a perpetual fear of “catching” her illness. Because of Mary’s affliction, it is possible that she may have been a bit of a social outcast and perhaps she was even shunned by her neighbors. In healing Mary, Jesus not only liberates her from the pain and suffering associated with her illness, but he also removes from her any possible social stigma.

Mary’s most important role in the Gospels comes at the end of the story, during Jesus’ arrest, crucifixion, and resurrection. While it is true that the Gospels differ in these events, they all agree that Mary Magdalene was there through it all; she remained at the foot of the cross, along with three other women: Mary, the mother of Jesus; her sister (Jesus’ aunt, who is unnamed); and Mary of Clopas. They were not watching from a distance, as narrated in the other three Gospels, but were close enough for Jesus to speak to them (John 19:26–27).

This detail is often missed but it offers us a deeper insight into Mary’s character: Not only did Mary steadfastly remain with Jesus, but she was an eye-witness to the traumatic events as they unfolded that day.

It is difficult to imagine what it must have been like for Mary and the other women to witness such a horrendous event. Most people would probably run and hide—which is precisely what most of Jesus’ male disciples did. But Mary Magdalene did not flee; she stayed with Jesus until the very end, watching helplessly as he suffered and then eventually succumbed. Following Jesus’ death, Joseph of Arimathea, a secret follower of Jesus wrapped Jesus’ body in a linen shroud, and laid it in a tomb.

According to John, the tomb was in a garden and Mary Magdalene returned alone to the tomb while it was still dark outside and noticed that the rock sealing the entrance to the tomb had been moved. She ran to tell Peter and the unnamed “beloved disciple” that the tomb had been unsealed and they raced to the tomb; finding it empty, the two men left, but not Mary; she remained in the garden, alone in the dark, traumatized and weeping from the day’s terrible events, and it is there that she encountered a resurrected Christ. Jesus was the last person she expected to see, and she initially mistook him for the gardener. It was dark and her eyes were likely filled with tears and who else would have been in the garden at that pre-dawn hour other than the gardener? However, when Jesus said her name she recognized his voice; there was something very special in the way he called her by name. Mary’s grief was replaced with joy as she was reunited with her beloved friend and teacher. We can imagine that it was a very powerful moment, and Mary Magdalene alone was witness to this Easter miracle. 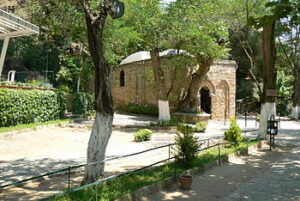 Even today, stories about Mary Magdalene abound. Her popularity in recent years is due in large part to the 2003 blockbuster detective novel by Dan Brown, The Da Vinci Code, which was made into a film of the same name in 2006. The Da Vinci Code, among other things, suggests that Jesus and Mary Magdalene were married and even had a child together (a daughter named Sarah). Dan Brown drew heavily on many of the Gnostic texts in creating his novel about Jesus and Mary Magdalene, and we must be mindful of the fact that Dan Brown is a fiction writer and that Brown’s story is just that: a story and that nowhere in the Bible does it state or even hint at the notion that Jesus was married to anyone, much less to Mary Magdalene.

While all of the stories, legends and other fictional accounts about Mary Magdalene will no doubt continue, they are important in our investigation because they point to the fact that, over two thousand years after her death, people are still interested and intrigued by her. As we begin to uncover the true Mary Magdalene, we can set aside the inaccurate image of Mary as a prostitute in favor of the truth.

Mary Magdalene witnessed the two most pivotal events in the Gospels; Jesus’ crucifixion and resurrection, this indicates the central role she occupied in the birth of Christianity. St. Augustine (fourth century AD) called Mary “the Apostle to the Apostles,” an indication of her prominence. It is therefore not surprising that Pope Francis finally elevated her status in the church calendar.

For more information on Mary Magdalene, as well as other fascinating women of the New Testament, see my book “Good Girls, Bad Girls of The New Testament: Their Enduring Lessons”.