The Lives and Roles of Women in Biblical Times.

Home/Bible, Archaeology and History/The Lives and Roles of Women in Biblical Times.

The Lives and Roles of Women in Biblical Times.

When returning from a trip to the Holy Land, many people report that they are in one way or another, transformed. The experience of wandering through ancient ruins and walking through the towns and villages mentioned in the Bible changes forever the way in which they read and understand the Bible. As a woman and professor of biblical studies who has visited the Holy Land many times, I find myself returning to this foundational question: What was life really like for women during biblical antiquity? My students and the average modern reader often complain that in the Bible, women are presented as second-class citizens, objectified, and cast to the sidelines in favor of the male characters in the biblical narrative.

I must quickly address two issues. First, the Bible is undeniably steeped in patriarchy. The biblical authors, however, did not invent patriarchy; rather, it was the social umbrella under which the various stories, poems, parables, and priestly proscriptions were written. And second, a closer reading of stories that include female characters offers us a much more egalitarian image of women than most people might imagine. Indeed, women, more often than not, are presented as people who manage to circumvent the strictures of patriarchy to become movers and shakers in their own right.

The Bible offers scant details about how women lived, worked, and existed within the patriarchal culture that governed much of their behavior. Fortunately, however, during the past several decades, non-biblical sources, both written and archaeological, have helped us to begin to sketch a more accurate portrait of women’s lives during the first millennia. Archaeological excavations, in particular, have enabled us to see where women lived; the homes and neighborhoods where they worked and took care of their families. Artifacts, such as pots, tools, and jewelry have been unearthed that allow us to imagine the hands that fashioned them, used them, and treasured them. 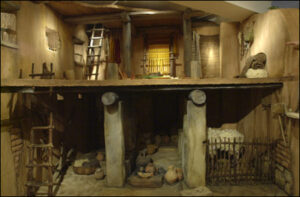 Reconstruction of an Israelite Home

Although the portrait of women’s lives during antiquity remains an incomplete canvas, there are some aspects of their daily lives that we can surmise with reasonable certainty. In general, we know that life for most women was challenging, arduous, and brief. The overwhelming majority of women lived in rural villages, in agricultural settings with a much smaller percentage of women living in the few scattered urban centers, mainly in the capital, Jerusalem. My focus here will be on their lifestyle, though much of what can be said about them can likewise be said about women who lived in cities.

Marriage was considered the natural state for men and women and although there are certainly instances where Jewish men (and, to a lesser extent, Jewish women) were not married, this was the exception rather than the norm. Most women married quite young, usually soon after the onset of menstruation, which of course, heralded fertility. Marriages were usually brokered between families and most women had little or no say in the matter. Men typically married later (in their twenties, or even thirties) and thus most men were older than their wives. Since the life expectancy for women was shorter than for men (for rural women, thirty; rural men, forty) this arrangement made sense.

Girls were expected to remain virgins until they were married. Virginity was highly prized in ancient Israel, not only because of its religious implications, but also because virginity implied a certain measure of self-control and obedience, qualities desirable in a wife and predicative of marital fidelity. 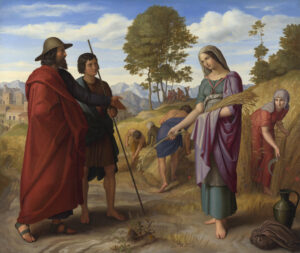 Ruth, working in the fields of Boaz.

Shortly after marriage, a woman would assume all of the duties expected of a wife, including maintaining the home and bearing and raising children. Her days would be long, literally from sun up to sundown, and filled with many chores and responsibilities. She would rise early, typically before the rest of the family, and light the fires for the day. She was also responsible for cooking and serving meals, cleaning the house, making and mending clothing, tending to the family livestock (which usually consisted of a few sheep and perhaps, a cow, that lodged in the front part of the house), and assisting her husband during the harvest. A woman’s primary role and duty, however, was that of mother.

With children, of course, came added responsibilities and duties, which women gladly accepted. Children remained at home with their mothers until about age five, when boys were considered old enough to begin to work alongside their fathers in the fields. Before that time, children were required to help with household chores and learn the social skills necessary to live and work within the community.

While children were considered blessings from God, what can be said of those who were not so blessed? Barrenness was seen as a terrible curse and always the “fault” of the woman. In the ancient world, the medical causes of infertility were unknown and male sterility was never considered to be the cause of the problem. Hence, the barren woman not only felt incomplete in her expected roles as wife and mother, but she was also socially ostracized and the likely victim of sidelong glances, gossip, and ridicule among the townspeople.

In a patriarchal society, it is generally assumed that men created and enforced the laws, dominated religious and political life, and had the final say in matters pertaining to all facets of family life; but is this really the case in ancient Israel?

Some notable examples include the great judge Deborah (Judges 4-5), military leader and prophetess and Bathsheba, who begins as a victim of King David’s lust (2 Samuel 11-12), but then emerges as a powerful queen who manipulates events in order to promote her son Solomon to succeed his father.

In patriarchal societies, men owned most of the land, which was typically passed on from father to son. Though this is the norm, there are instances of female inheritance in the Bible. Evidence from outside the pages of the Bible also supports the notion that women could and did inherit property. Documents uncovered from a Jewish military outpost in Elephantine, Egypt (6th-4th centuries BCE) clearly show that women were permitted to buy and sell property; in some cases, women even inherited land over and above their male siblings. 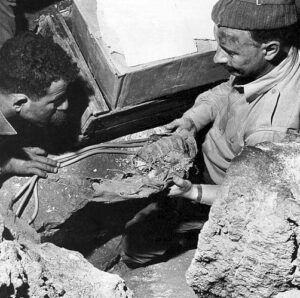 Archaeologists discovered similar documents dating from 93-132 CE in the so-called “Cave of the Letters” located in southern Israel. Often referred to as the “Babatha Cache”, these documents, thirty-five in all, were unearthed in excavations led by the legendary Yigael Yadin between 1960-61. Babatha’s Cache represents the largest collection of documents ever found in the Holy Land, but how did this cache end up in a remote, nearly inaccessible cave? In the midst of the Bar Kochba Revolt (132-135 CE) a group of seventeen people—men, women, and children from the oasis village of En-gedi—were forced to flee the advancing Roman army and took refuge in a cave. Unfortunately, the Romans set up a camp just above the cave, making escape impossible; the refugees perished, probably from starvation.

In a small pit carved out and covered by a rock, was Babatha’s purse. Inside the leather pouch, wrapped into neat little bundles and secured with rope, were Babatha’s (mostly) legal documents. Included in this treasure trove of ancient papyri were marriage certificates (Babatha was married twice), various lawsuits, and property transactions that indicate that Babatha inherited land from her mother as well as from her second husband. It is striking also that Babatha’s mother owned property and passed it on to her daughter.

Overall, in both the Hebrew Bible (Commonly referred to as Old Testament by Christians) and New Testament, women had less legal rights then men. For instance, a father could sell his daughter into slavery (Exod 21:7) and though there was a rule that required male slaves to be freed after six years (Lev 25:40-41), there was no such rule for female slaves. When it came to divorce, it was generally presumed that men held all the cards, but, not so fast! While it is true that some passages in the Hebrew Bible seem to indicate that only men could initiate divorce (Deut 24:1-4; Jer 3:8), the Elephantine documents indicate that women not only initiated divorce, but also were allowed to keep any possessions they brought to the marriage after the divorce. There were even special provisions in cases involving abuse.

In the New Testament Jesus seems to have parted ways with the Mosaic provision for divorce and in Mark’s Gospel (70 CE), he forbade it for any reason. In Matthew (90 CE), Jesus seemed to mellow and appeared to have allowed divorce in cases of adultery, sometimes interpreted as “un-chastity.” The Greek word translated as “adultery” is porneia, the meaning of which has been hotly debated among scholars, commentators, teachers, preachers, and everyone else who has ever studied Jesus’ position on divorce. The overall consensus is that porneia here refers to marital infidelity.

Generally speaking, in both the Hebrew Bible and New Testament, divorce is undesirable, but in certain cases, it is something that both men and, to a lesser degree, women were able to initiate.

Though gender roles are clearly defined in the Bible, there are many cases of women and men stepping out of those roles. In the Hebrew Bible, for example, the great patriarch, Jacob was fond of cooking, a chore in the Bible usually associated with women. Though most soldiers were male, the judge, Deborah assumed a military role and helped to engineer the defeat Jabin of Hazor and his general Sisera (Judges 4 and 5). 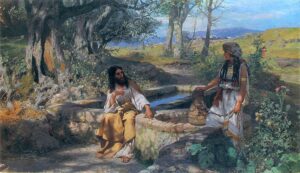 In the New Testament, Jesus ignored the strict rules that governed male-female interaction, which was usually limited to family members. For example, in John 4, Jesus meets an unnamed Samaritan woman at a well. Disregarding the social conventions of his day and the fact that the woman was a Samaritan (Samaritans and Jews had a long-standing dislike for one another) Jesus’ conversation with the Samaritan woman represents the longest conversation Jesus has with anyone in the Gospels. Their meeting is an extraordinary tale that challenges the prevailing social norms of the day relating to gender, ethnicity, and religion.

As we conclude, we return to our initial question that focuses on the quality of life for women during biblical antiquity. Taken alone, the Bible offers us a complex array of women, some occupying so-called traditional roles common to patriarchal societies of subservience to men, while others step gracefully or stridently out of those roles, boldly bringing about God’s plan in unconventional ways. Archaeological evidence and texts outside the pages of the Bible are sometimes at odds with certain biblical texts, the latter often indicating a more egalitarian society than the Bible would have us believe, but such evidence is by no means conclusive. What we can say for certain is that the biblical authors are products of their particular time and space in history and their writings reflect the social norms, including gender roles, of their particular carbon footprints. In many ways, we must look beyond the social confines of any given story that features female characters so that we may mine the rich gems of wisdom that the biblical author sought to impart.

To read more about the often surprising lives of women in the bible, along with their enduring lessons for us today: Old Testament and New Testament.